Blog
You are here: Home / Blog / Blenders / Cuisinart 600 Watt Blender – Which One Should You Choose?

The Cuisinart 600 Watt Blender comes available in a few different models, but which one will reign supreme?

Cuisinart has pretty much set the trend when it comes to top end blenders and food processors.

They have an amazing 600Watt Blender range, but the problem is that not everyone knows the difference between the two of them.

Luckily I do, so I’m going to share my insight with you today.

Let me do this the good and proper way then…

I like the SmartPower Deluxe Die Cast Blender from Cuisinart because it sports a great base that brings loads of stability to the table. It looks stylish and sleek with the brushed metal finish, but the base being taller than the pitcher kind of threw me off guard.

The SmartPower comes with cool features like a 2 minute auto-shutoff, a 4-speed electronic touch pad control and a stay-sharp stainless steel blade fitted into the pitcher.

Overall I think this blender stands out thanks to its sturdy base that doesn’t need you to babysit it because it won’t move around on the kitchen counter. 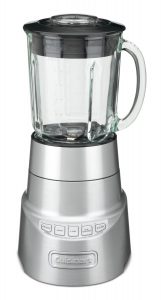 Look I had to try the Powerblend 600 because it sparked my interest with its powerful motor. Seeing that the market is flooded with 300 or 350 watt blenders, I get a little excited whenever I see something out of the ordinary, which is what the Powerblend did for me. The Cuisinart Powerblend comes with a generous 56 ounce pitcher, a measuring cap and a stylish chrome finish and LED display. I really appreciated the large and easy to spot ON / OFF switch that’s backed by a powerful 600 Watt motor. The Powerblend also impressed with its 7 pre-programmed settings including stir, blend, puree, pulse, mix, chop, liquefy and crush. 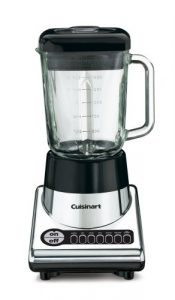 The Cuisinart Remix 6.0 comes with a great price tag, but besides its affordability, it’s also just the right size with just the right power. I like the ultra-sharp stainless steel blade inside of the reasonably sized 48 ounce Tritan jar. As far as the controls go, the Remix sports an electronic LED touch pad with settings for high, low, pulse and ice crushing. The tight seal lead also comes with a 2 ounce measuring cup so that you can add ingredients as you blend. I’d recommend using this blender for whipping up smoothies, sauces and soups. 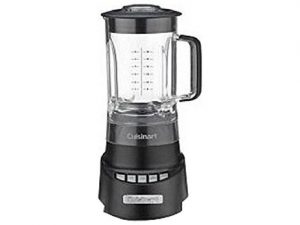 So I’ve listed three Cuisinart 600 Watt Blender options, but now that you’ve seen what they bring to the table, are you sure about which one to go with?

Personally, the Powerblend 600 has a few flaws that I just wouldn’t be able to live with like its blending issues from time to time and the fact that it’s really heavy to move around. The Smartpower 600 just brings that much more value to the table, and at the end of the day you need a high performance blender right?

Cuisinart 600 Watt Blender models aren’t exactly work-horses, so don’t go expecting them to survive constant usage without burning out at one point or another.

For its price, capabilities and ease of use, I recommend investing in the very affordable Cuisinart Smartpower 600 Deluxe Die Cast Blender to take care of all your blending needs!

And that’s a wrap on Cuisinart’s 600 Watt Blenders, but I’ve still got a lot that I need to tell you about. Coming up next I’ll be telling you all about the Vitamix Food Processor before I’ll be glancing back at the genius of an era long gone, the Sunbeam Oskar Original Food Processor, so make sure you don’t miss out!

Bow Hunting For Beginners – All The Gear And Tips You Need

Fluting Knife – Know Why They Are Ideal
Scroll to top