Blog
You are here: Home / Blog / Hunting Knives / Want To Own A Best Cheap Knife Sharpener? Read This Now!

I take great pride in my hunting knives. They look sharp…but when they’re not performing sharp I don’t have any reason to brag about them.

A lot of knife sharpeners are actually very expensive, and since I’m not the type of guy who would spend oodles on a tool like this when I could rather buy my little girl something she really wants, I totally get that sharpeners tend to be overpriced in general.

Not exactly. While the general rule might apply to large tools such as your rifle, your bow and your gear, I’m going to show you why it’s more than okay to invest in cheap knife sharpener.

Think about our forefathers – they all made due with what they had. Heck, some salesmen back in the day had grinding stones attached to their bicycles, and the trip up and down town produced just the right grind at the right angle to deliver razor sharp edges.

Old school technique hasn’t been forgotten – which is evident in the part where I told you how to sharpen mower blades – but with modern inventions it’s almost impossible to take the frugal approach when you could just grab a hi-tech, efficient and easy to use tool.

While the art of knife sharpening isn’t something that happens overnight, and if you’re not applying the manual technique in the right way, you’re going to end up with poor results.

My friend Mary actually has some killer advice on how to sharpen knives with a stone, so if you’re a little unsure of the process, check out her article on Different Knife Sharpening Methods. Since I’m not here to delve into the art of knife sharpening right now, I’ll just move on to the next point.

Essentially, you get 2 kinds of knife sharpeners; manual and electrical sharpeners.

I’ve already touched on the manual process, and warned you that you’ll need the know-how if you’re going to tackle sharpening your knives manually.

Coming in as the substitute of manual sharpening is the electrical sharpener. These sharpeners are also known as automatic knife sharpeners.

Sure, they’re fast, convenient and offer you precision results. You don’t need ANY skills to use them and as a bonus, they’re usually compact as well..

BUT (bless your soul if you’re using an electric for this) automatic knife sharpeners ARE NOT suitable for hunting knife sharpening, unless you really want to stuff up the blade.

I’m not totally against electric sharpeners.

But the campaigns selling the “brand new all-in one electric knife sharpener” that creates the perfect edge in “just one pass” is crap. I’ve been there, done that and got the T-shirt.

So, for that matter I’m not even going to bother showing you what electric sharpeners might be okay to use, because I don’t think they are. There are some much better tools out there that are going to get the job done, produce excellent results and best of all, they’re affordable!

The Best Most Affordable & Cheap Knife Sharpeners One Should Know

By now you know that I’m talking about actual manual sharpeners and not electrical noobs.

These sharpeners deliver razor sharp, beveled edges and the best part is: they’re cheap and reliable plus they’re potable!

This waterstone works perfectly for achieving maximum sharpness with minimal effort. This is a whetstone, so you’ll need to soak it before using, but the fine and superfine grits offers you the perfect way of sharpening and polishing your blade’s edge.

I’ve found this stone to be very reasonably priced (even though it’s a tad more expensive than other whetstones) for the amazing results if offers.

This is the kind of stone that I would recommend for home use only. You’re not going to have fun with it out in the field. 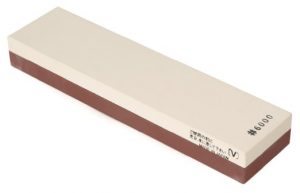 Okay so I only really tested once cheap sharpening stone, because to me, having a small, portable tool on-hand when I’m out in the field just makes that much more sense. The cheap knife sharpeners coming up next are all compact and lightweight.

If you want a ritualistic knife sharpening experience, strong control over the outcome and a compact tool, Smith’s 50264 Adjustable is just for you.

Packed with a two-stage grinding wheel, you can go from coarse to fine for effortless sharpening and polishing.

Thanks to the double-sided design, you can easily sharpen both edges of straight blades, and for serrated blades, it has the fire-angle slot.

Overall, I scored this clever little pocket tool 4 out of 5 stars, and for its price, I consider it a massive bargain! 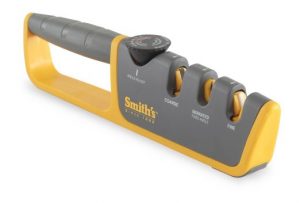 I personally own one of these little superstars, and it has never let me down. While all man-made products do come with some issues, I have to say that overall it outshines its competitors. It’s great for carrying along with you on a trip and will tackle various kinds of blades. It’s a two stage sharpener that comprises of a tungsten carbide grit blade to realign edges and a ceramic rod for getting rid of nicks.

I’ve scored it 4.5 out of 5 stars for its sheer durability and effectiveness over the long run, and would have made that 5 if it wasn’t for its weight. 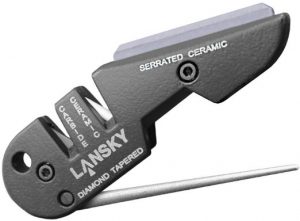 Essentially, the PP1 is Smith’s answer to Lansky’s BladeMedic, and honestly…it’s a toss-up between which one is the best. I love them both. The PP1 comes in at the same price of the BladeMedic and it functions pretty much the same. It also boasts the carbide and ceramic rod plus the diamond rod that’s present on the BladeMedic, and it’s just as slim and sleek too!

Here’s the difference between the two: the PP1 is actually lightweight, weighing in at just 1 ounce! This nifty number also scores 4.5 out of 5 stars. 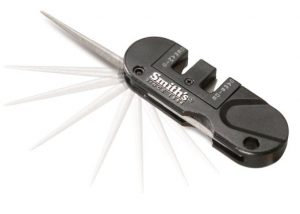 And that’s a wrap guys. See…that cheap knife sharpener might just turn out to be the bargain of the century that’s probably going to outlive you!

Coming up next, I’ll take my quest a little further and dive head-on into showing you what the best hunting knife sharpener looks like!

How To Sharpen Mower Blades – All You Need To Know